DAY 16 was a quietish day down at Camp Freedom. It was a bit grey and windy, and rain was forecast. There was no early morning police activity, and it felt like a day for consolidation.

The hot food tent was closed, but that was to enable a new (longer term) system to be set up. But Papa Honez and the Hare Krsna tents were still feeding the five thousand (not literally, biblical reference there if it went over your head). Though 2000 being in permanent residence wouldn't be too far off the mark. At the latest count, there were 750 tents, most of which will have multiple residents, and that's without counting camper vans and buses.

Some of our home cooks, who have been contributing hot food for two weeks, took the opportunity to have a rest today too. But it didn't stop them doing some baking or at least discussing some possible recipes for tomorrow. Anyone keen on peanut butter cookies, gluten free orange marmalade cake or avocado chocolate mousse balls? See how they are being inclusive and providing for those with special dietary needs? Love those guys. The day wasn't completely uneventful though. The police (or more likely those telling them what to do), decided to go back on their assurance that the portaloo maintenance trucks would still be able to go through the road blocks. It seems it took Leighton Baker going to the Human Rights Commission to force them too allow them through this morning. Then they pulled the same stunt again tonight. I'm not sure what made them change their minds, but eventually the truck was allowed through. What do you think this was about? Maybe just mind games? Maybe to try and force the unsanitary conditions that have been reported on the media, but have so far been untrue?

If you don't know what I mean, the media have been saying that the waste from the portaloos has been emptied straight into the storm water drains. This is simply not true. Do you really think anyone would allow that to happen? Portaloo truck trundling off to do its job on the far side of the police blockade. Photo by Chantelle Baker.

The rain started this evening and its cold. Hope everyone is wrapped up warm. Signing off to chill out for a bit.

BOLLOCKS, I MEAN BLOCKS, CONCRETE ONES

Came back to turn my computer off and had missed all sorts of action. Remember how the police offered free parking at the stadium, to free the streets a bit? Some people said "F off, we know your tricks" and others took them up on it. Well, today it was announced that free parking had come to an end. Move your vehicles or start paying $15 a day. Huh, but now the streets we were parking in have concrete blocks at the ends. What do we do now?

Have you heard the latest joke in town? I heard it from a woman I spoke to on Tuesday. Not sure if she'd just made it up, or it's doing the rounds:

Suffice to say - by the time I headed for bed, it appeared that all of the stadium vehicles, plus a new convoy from the South Island, were safely inside the cordon. Before we start on Day 17, I'll take the opportunity to update some things from my last post. Some of it is a couple of days old now, but I'm a sporadic blogger, so not giving up my day job.

First a huge thumbs up to Rodney Hide. When ACT was lead by Richard Prebble and Rodney, they had my respect. They actually stood for self responsibility. I've also had the pleasure, since then, of meeting Rodney a time or two. I was impressed with his open letter to David Seymour, "I support the protest 100%", calling Seymour out on his support of the government mandates, rather than the principles of ACT that he says he stands for: https://www.bassettbrashandhide.com/post/i-support-the-protest-100-percent

There does seem to be a bit of a change in Seymour's narrative since then. We can all make mistakes, and we can all change our minds about things. So maybe I need to be a bit more charitable than I was a couple of days ago, and give him the benefit of the doubt.

Back to Rodney - his latest blog post "The Protestors Have Won" https://www.bassettbrashandhide.com/post/the-protestors-have-won has proven once again that some (ex) politicians have ethics. Having someone of his calibre speaking out in support of the protest is a great comfort and morale booster. Thank you!

I was less than charitable towards Winston Peters in my last post too. While he hasn't won my trust, he also deserves kudos for standing up for the protest. Are you back to being the Winnie who could always be depended on to be a maverick and say the hard things that nobody wanted to hear? I hope so.

I'm going to cut Andy Foster a break too. I was appalled to read this article (if it can be called that) on Stuff https://www.stuff.co.nz/dominion-post/news/wellington/127849534/dangerous-and-appalling-fury-after-wellington-mayor-meets-protesters?cid=app-android
Andy, I want to say to you that if this is what you've been enduring for your term in office, well done on getting through 3 years. I'm open to the idea that maybe you're not to blame (or at least not solely) for WCC mandating what government didn't. The councilors featured in the article, I want to say to you that I don't know what is more disturbing:

As for you, Jacinda... no, still not cutting you a break.

Aren't you guys embarrassed by the games you're being forced to play? I'd put money on it that most of you are. We know that there are UN forces amongst you. We can see the sociopaths amongst you. And we see you - the decent cops who want to do what you signed up to do. Just like the decent cops can see the people and can also see the agitators that are there for all the wrong reasons. Time to revisit one of my pics from two weeks ago. "Human waste flung at cops" - the truth seems to be that someone in a balaclava (so not a protestor) flung a bottle containing something that could have been urine, or might just have been fruit juice, at a cop's foot, then ran away.

"Something sticky and acidic thrown at cops by protestors" - although this hasn't been confirmed, video evidence does seem to indicate that a police officer was trying to pepper spray a protestor and hit one of his own by mistake

"Protestor tries to run police over" - the perpetrator was found and is being taken to court. So far it's known that he is homeless, and has a history of making trouble. It's not known whether he was a protestor, or where a homeless person got a fairly modern car.

"Protestor fires rocket at police" - the counter claim on this one was that he had an ear piece in so was police. It seems he was a deaf person, who did release a firework in error. 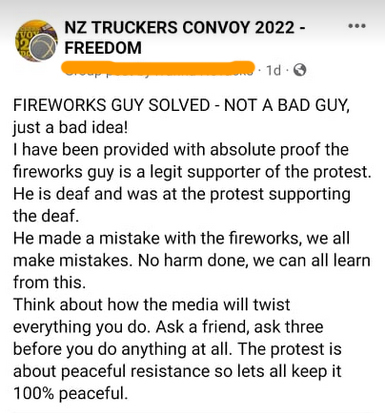 "Police eye gouge defenceless senior citizen" - this one is actually true, but you didn't read that on the media, did you? Stuff showed a video of a violent looking scuffle, then placed a caption over part of the action. When better footage was seen, a police officer could be clearly seen punching and then eye gouging a man who was doing nothing to him. This man was one of the few arrested that day. You can see for yourself in this 2 minute clip from Chantelle Baker https://www.facebook.com/ChantelleBakerNZ/videos/638338877432069 - you might need to try it on a few different devices. I can pay it on my tablet but not my PC.

Some electronic experts have informed us that the mystery device on the roof of the old Parliament buildings looks like a very high zoom capability pan tilt zoom camera system. It will most likely have facial recognition built in, and possibly also the capability to eavesdrop. Not alarming at all. Yeah right. So that's not what is causing the unusually high EMF (electro magnetic frequencies, or radiation) readings. I don't think anyone has figured out where they are coming from yet. So this is still an issue, but I believe is being addressed.

When I go down tomorrow, I'm taking an EMF reader and will see what readings I get where.

If you're going down there for any length of time, any garments or head gear that you can line with faraday cloth, or even tin foil, really will help stop the EMFS. Tin foil hat man knew what he was doing! So here he is again. I promised a map, so here it is. I found this article from The BFD https://thebfd.co.nz/2022/02/23/please-stand-with-us-on-the-right-side-of-history about Voices for Freedom having facilitated a meeting of the Human Rights Commission with a large number of people who have had their human rights violated. "Others attending included the Police and representatives from The Freedom and Rights Coalition, The Health Forum NZ, NZDSOS and independents. Invitations to attend in person or via Zoom were sent to multiple Politicians. It is regretful that they did not make the most of this offer to enter into dialogue." Thanks to all involved in this, and we hope we now see increased understanding and support from the Human Rights Commission and others who may not have realised how much people have lost.

A few hours later on Newshub, Hipkins and Bloomfield confirmed that:
o people from the protest had arrived at the emergency department with COVID-19, though it is not known if that's why they went there (Really? I think you do know.)
o The protest was designated as a location of interest, with people there between 11am and 11:49pm on both Saturday and Sunday told to self-isolate for seven days. (Bahahaha, yeah, that's happening)
o That advice becomes redundant at 11:59pm on Thursday night, when we move to phase 3 and only household contacts will be required to self-isolate. (So you were just grand standing then?)
From these salient facts, I'm going to call it that the people in question were weekend visitors, not permanent residents, and they went to the ED for other reasons. I'm also going to point out that it would be very convenient to be able to say this was a super spreader event, which anyone with a rudimentary grasp of logic can see is not true. In a few short hours, it becomes academic anyway.

Mainly the day has been fairly quiet, but as I tuned in about 4pm, there was yet another face off with police. Apparently they came down in afternoon rush hour, again, to move some bollards, again. I dipped in and out of the coverage but it seemed to take a couple of hours, and waste an extraordinary amount of (wo)manpower for no good reason. I can't even find out where they were moved from and to. I'll go check that out tomorrow.

When one of our team did a drop off of some hot food this afternoon, he found that, true to their word, police are letting food in. At the end of one of the blocked off side streets... From there it has to be carried or wheeled in a shopping trolley. And once again, they were playing silly buggers with the portaloo maintenance. Asking again, aren't you embarrassed by this? You know it's not going to work, don't you?

Whatever the night may bring, hold the peace, brothers and sisters xx